Revisiting McClelland Gallery and Sculpture Park, I took so many photos that my computer is overwhelmed, and only down loaded one photo. So folks, this is it for today. I need to get the computer man to work out what has happened.

This park didn’t let me down, the boys were delighted to return, running around, knowing where their favourite sculptures are, as well as discovering the new ones in the most recent survey. The bush landscape was looking refreshed after rain. 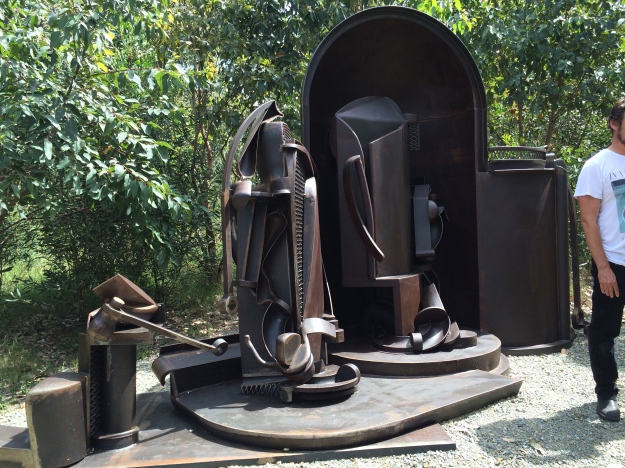 David Horton In pace (in peace) After Verrocchio’s Doubting Thomas. For Dad 2014

The McClelland Sculpture Survey opened today with perfect weather. There were crowds attending. We appreciated seeing the sculptures in the bush setting as well as seeing the plantings we did some years ago now. I shall post just a few of the 33 sculptures in the prize. 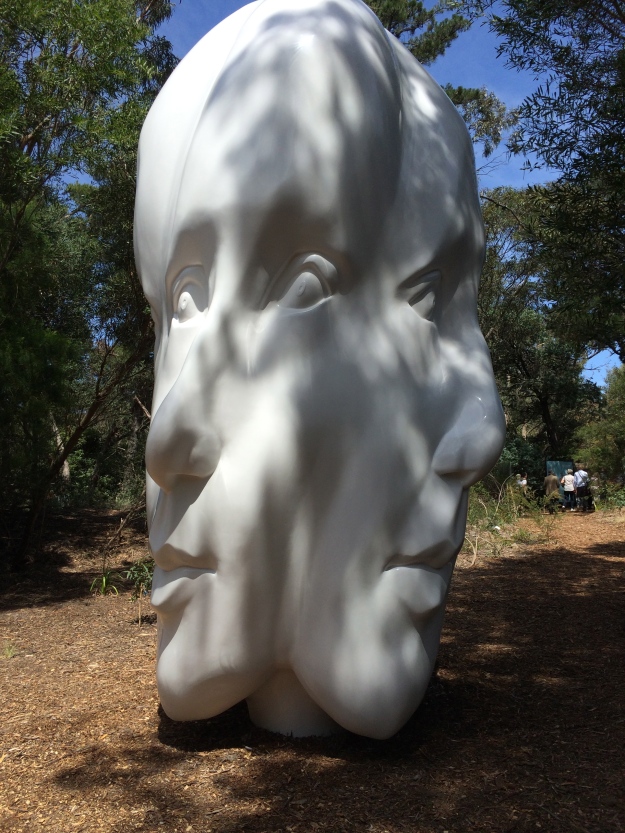 The back lake where we did everything to eradicate the weeds, emptying the lake, digging and burning. Obviously to no avail! The shiny silver is an Adrian Page sculpture in the background. 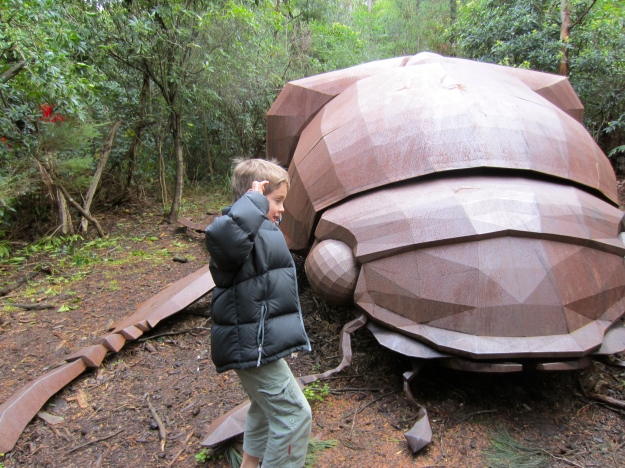 Boys walking over the bridge that Chris proudly built over a boggy area. 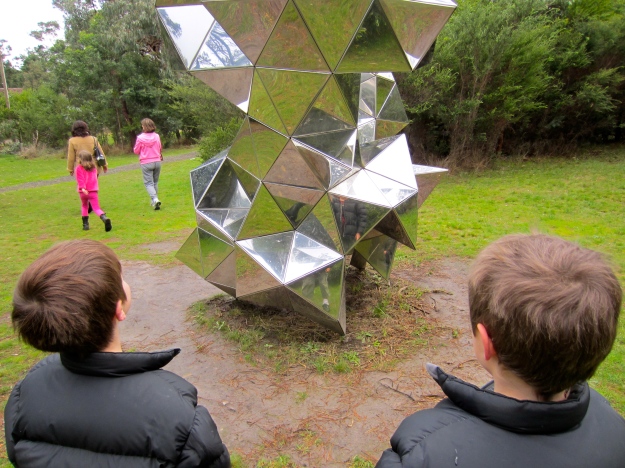 I apologise not to have included sculptors’ names, but can add them if any one is interested. These few sculptures may give you a better feel for the McClelland Gallery and Sculpture Park, Langwarrin, Victoria, Australia. I shall include more photographs as time goes by. 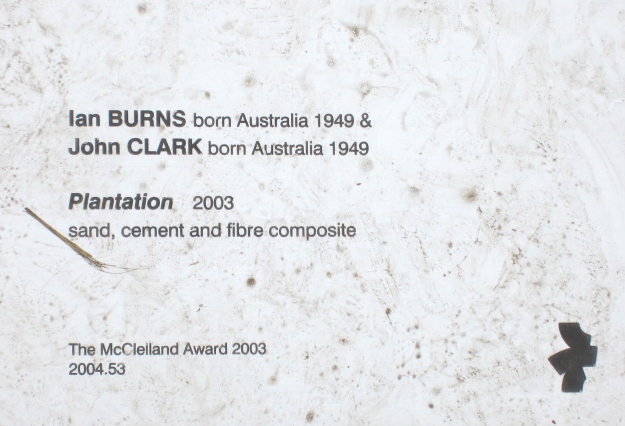 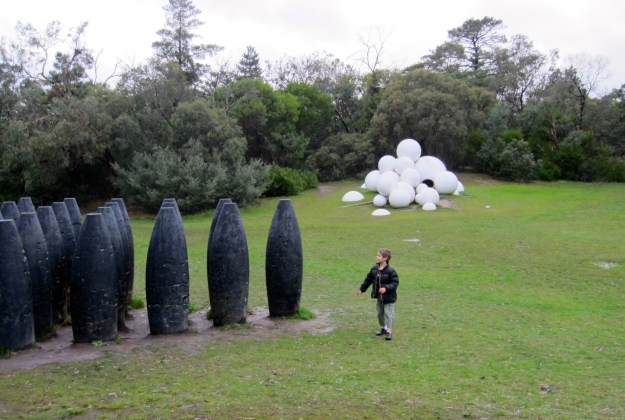 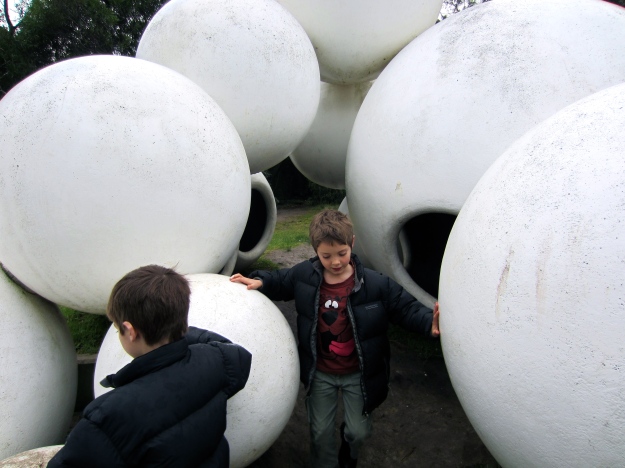 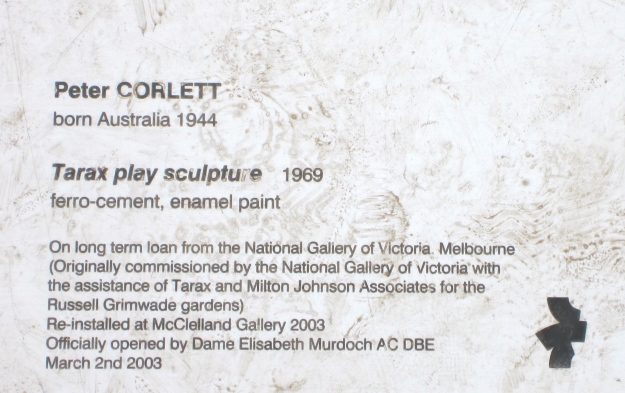 Having time off from blogging has inspired me to catch up on lots of jobs that had been put aside, things to do later. The satisfaction is enormous. I have found a new Danish computer man, Thomas, who helped me solve a couple of things that will allow me to do some tidying up on the computer and also to understand some of the simple things that seem obvious to everyone else.

The TV aerial needed adjustment since we’ve gone from analogue to digital. Every storm or rainy night left us with a black screen. It is quite a treat to see a session without having to fill in the blanks.

The garden too has benefitted from the installation of a watering system, ready for next summer.

Having the children introduced us to predawn starts to the day again. I have included some photos of our visit to McClelland Gallery and Sculpture Park, where we used to live in the caretaker’s cottage. The boys enjoy running around finding their favourite sculptures. I love to see the growth of the trees we planted. The sculpture park is on 40 acres with lots of sculptures scattered around the park. There is a biannual sculpture prize of $100,000. Shall introduce you to more sculptures as time goes by.

Troubling times for those around us makes us realise how fragile life can be. Our neighbour is in intensive care after a very severe car accident. Another larger car swerved onto her side of the road. It took an hour and a half to cut her out of the car, before she was airlifted to the Alfred Hospital in the city. Her injuries are massive, and we’ll wait to see if she’ll survive. It makes us grateful for every day, as none of us know what the future holds.

The children decide to call the duckling Fenella. They really don’t want to leave her, but it is a beautiful park and there are lots of other ducks.

They have tears in their eyes when they have to leave.

Fenella hides amongst the kangaroo grass and the Acacias, below a large sculpture. She has to learn to find food for herself.

When Fenella waddles up to the café in the park she is shooed away, because the café staff don’t want her messing on the patio. At weekends, when Joan is on duty, she sends children down to the lake with breadcrumbs. Watching the other ducks Fenella soon learns to scavenge for food herself.

Sometimes at night Fenella is very scared. There are foxes that roam the park. She swims out to the island in the lake. The other ducks are less scary than the foxes! She hides, hoping that the other ducks will not peck her.

Fenella spends her days scratching in the mud finding her food. She is unaware that she is getting bigger. She loves it when children visit the park and throw breadcrumbs. It reminds her of the family that brought her here.

Fenella is no longer shy and her sleek coat of white feathers is mirrored in the lake as she swims. ‘Wow, she looks big’, cries Will. (pictured: Hazel and Finn pointing showing their parents, when they arrive back in spring).

They all watch as the ducks swim around in circles with the ducklings paddling hard to keep up. It’s good to know that Fenella won’t be lonely anymore, now that she has such a large family!’ says Jack.

‘That’s great,’ says Dad as he packs up the picnic, ‘let’s go for a walk and look at the other sculptures, before we say goodbye and go home.’

This story was written after we’d been caretakers at McClelland Gallery in Langwarrin Victoria, Australia.  A duckling was brought to the gallery’s lake, which inspired this story. After completion, I thought it was a bit like ‘The Ugly Duckling’, but hopefully it is different enough to stand on its own.

Miracle Matthew, my computer man has been and fixed my recalcitrant computer.

Today is the anniversary of the birth of an important person in our lives, Dame Elisabeth Murdoch. She lived a full and exciting life, supporting the Arts, amongst her wide and varying interests. We were lucky enough to be living nearby as caretakers at McClelland Gallery and Sculpture Park; where she took a particular interest. We could see her warmth and genuine caring at close hand.

Not only was Dame Elisabeth an icon; she inspired others to fulfil themselves to become better people. One can’t pass Cruden Farm without thinking of her. Her trees will remain to benefit generations to come. Her garden continues to raise money for the many charities she  supported and remains an oasis in Langwarrin.

There is now a Peter Corlett sculpture of her to inspire those who visit the Frankston Arts Centre. For those of you in the city, all three venues are worth a visit. Make sure you make a booking at McClelland Gallery and Sculpture Park for a wonderful lunch; allowing time to walk around the park to see the sculptures, before visiting Cruden Farm. The gallery should be able to tell you if it is a Cruden Farm open day.

It would have been Dame Elisabeth’s 105th birthday today, the year that she had hoped to achieve. Still 103 is no mean feat. There will be many people remembering her today.