A break from routine allows the richness of conversation and shared meals with family and friends; plus the unspoken: pulling weeds, mulching, fertilizing, children to stay, shopping, pruning, cooking, cleaning windows, general cleaning, washing, ironing, washing up, sweeping, picking fruit and vegetables, making jam and chutney, watering, stewing fruit for the freezer, reading, writing letters to those neglected at Christmas time and contemplating getting the year organized making a list to get things fixed.

The TV is on the blink. The solar hot water system needs replacing. The cement step from the absent spa must be removed. Gutters are choked. Solar panels need cleaning. The cubby needs fresh paint. The dishwasher died and needs replacing. Edging around the garden beds need attention since the lawns haven’t been mown. Incessant need of sweeping gum leaves from driveway, patio and paths. Lopping grevilleas and correas to maintain bushiness. Finally, book an appointment with the physio to restore use of shoulder.

‘What do you think caused this bursitis?’ Lachlan asks.

I resist giving him a blow by blow explanation.

Most people, who don’t read my blog, wouldn’t know that I love playing with words. Here is today’s effort. A rather hasty one, as I have dug up the raspberries, and need to fertilize the soil and replant them. Putting up stakes and wires to try to bring a semblance of order, so that one can walk between the rows. Here is what came to me this morning, early:

Hey diddle diddle, the cat and the fiddle, the cow jumped over the moon.

The pigs squeal with delight as they fly off in flight. Geese soar up above, screaming their love,

Flapping and honking, squealing and oinking, whelping and mewing, circling and hallooing.

The dog and the cat chase till red in the face. Puffed and defeated with a final expletive,

They curl up to dream of peaches and cream, staying warm till the dawn, no longer forlorn,

Content to snuggle, a warm furry cuddle, as the cow settles down for her milking.

A Mystery Wrapped in an Enigma: Daily Prompt by Michelle W.

Tell us something most people probably don’t know about you.

Today’s prompt could encourage me to share, boringly, how I remain lazy, not wanting to take the next step with manuscripts. Instead, I prefer to share with you a quote my mother used to use of Robert Owen’s. As I get older the more relevant and true it becomes:

‘All the world is queer save thee and me, and even thou art a little queer.’

Do we become more critical and discerning as we get older? Are we more accepting when young? Sometimes I feel uncritical, but if I allow myself to think deeply, this adage rings true. Meditation allows me to obliterate such thoughts and calmly proceed.

So why worry about what is sliding, one day I shall attend to it, if there’s time.

From your musical tastes to your political views, were you ever way ahead of the rest of us, adopting the new and the emerging before everyone else?

Solar energy comes to mind. My father was selling solar panels in Tasmania back in the 1970s. He was ahead of his time. He put solar panels on our home when we returned to Tasmania to heat our hot water. We also had a Raeburn stove, so the water had duel heating methods, but it helped keep our power bill low.

When we moved into this home, our first task was to get solar energy to assist to bring our costs down. Although it was initially expensive, our hope of having lower living costs was a priority, as well as our bit to help the environment. Today, we had the service man to service our system. He had many ideas about how we could go off the grid altogether. That is our next priority. Changes are happening so quickly with the power companies charging more, we are really grateful that we are able to do this.

It is so sad that our government is not encouraging and prioritizing alternative energy sources, in fact, making it more difficult, by closing down any support to agencies that are/were working and researching in this area.

Yesterday our Australian, (Tasmanian), author, Richard Flanagan, who won the Booker Prize for his book, ‘The Narrow Road to the Deep North’, spoke of how ashamed he was of Australia lagging behind, and not facing Climate Change. Congratulations to this wonderful author, I am really looking forward to reading his book, and well done for speaking up!

Free-write: 10 minutes, plus a little:

Recently I read Barbara’s post about names that has inspired this continuation of the topic. You may be interested in Silver in the Barn’s slant on this topic: http://silverinthebarn.wordpress.com/2014/05/15/names/

Names have always fascinated me as they each have their own allure.

Animals come into play here. I heard of Arra and Balla, two rats, named after Arrarat, and Ballarat, two Australian cities. We had a dog called Rummy, and his litter was called after spirits. Now that we have no name cigarette packaging this will probably inspire a pair of dogs to be called Benson and Hedges. Our last pair of dogs was called Curley and Ambrose, after the cricketer.

Writing allows us to stretch our boundaries. Would you use made up names or do you prefer to stick to traditional names?

Traditional meanings may influence your choice. My own name Barbara has meanings of: barbarian, foreigner and stranger. Until a friend showed me her special name book I hated my name. In this book my name meant, ‘bringer of joy’- a far more acceptable meaning.

When my mother was born my grandparents couldn’t make up their minds for their second child’s name. An old lady visited and my grandfather, without discussing it, said, ‘We’ll name her after you!’ So Brenda was named, without a second name. All five siblings received a second name, a sore point, as Brenda missed out.

Our family tree has many name repetitions, like: Hector, Henry, William, and the careers are also repeated. I like the continuity.

This prompt asks for one message, I shall limit myself to three letters. I have the irritating habit, like getting a stone in my shoe; that aggravates until I write a letter. In recent times I have written to a football club suggesting singing lessons would be to their advantage.            Of course there was no response to this letter, nor any change to their bellowing, discordant theme song at the end of each game.

Another niggle prompted a letter to the Pope. After writing to Cardinal Pell asking him to renounce his Order Of Australia, I received a wad of papers in response, ignoring my question. The next step a letter to Rome was in order. This letter to the Pope, both complimented him on his fresh approach to his new position, and included a complaint about Cardinal Pell. The latter figure was in a position of power when paedophile priests were destroying children’s lives. The priests kept their jobs, only being transferred to other areas to wreck other lives. I asked that Cardinal Pell should lose his position as head of the R.C. Church in Australia, as he lacked the responsibility to protect his parishioners.

Soon after, Cardinal Pell was transferred to Rome. (Now I thought the Mafia might take things in their own hands). Although I didn’t get a response from the Pope, this transfer prompted me to write and thank the Pope, saying: actions speak louder than words! During none of this correspondence did I mention that I was not a member of their religious community, but a concerned citizen.

Writing letters helps me get things off my chest, much as a blog does. It is therapy, so thank you for being my therapist and listening/ reading my ravings.

You’ve been given the opportunity to send one message to one person you wouldn’t normally have access to….  Who is the person you choose, and what’s the message?       Ben Huberman

My most precious thing, that fills me with most joy, is my library.

In fact it is our library. Religiously we go to the Hastings Library on the Mornington Peninsula where the friendly staff welcome us. It’s a small library by city standards. Books can be ordered from the bigger libraries, and the books get recycled between four libraries.

When I am not blogging, yes, I do have another life. Gardening, cooking, ironing, allow me to listen to audio books. Chris listens to stories as he paints. We are then able to discuss which ones we think are successful and why the others don’t come up to scratch.

We have discovered many genres previously unexplored. If we don’t like them we just start another. Popular choices are often crime fiction, from the gentle Donna Leon stories set in Venice, to popular Patricia Cornwell and many in between. Books of course are a separate bedtime activity. We read till we can’t keep our eyes open and allow the soporific effect to take us to an exciting dream world that we both fully participate in.

Without books our world would be quite colourless. (sorry, we Australians still like to use ‘u’ in some of our words).

If I am to have a party, it will be a ‘virtual party’ and you are all invited.

Solid wooden tables draped in white linen cloths are covered in food. The gentle light emanates from white tapered candles, displaying Elaine’s fabulous vegan dishes that tempt the most restrained of you.

Fluted Champagne and orange juice glasses are topped with fresh strawberries. The air is warm with wafting perfumes of Bragmansia, (angel’s trumpets) and jasmine.

Live music of your choice makes you want to dance. The person of your dreams entices you to dance. Heady with movement, sound, warmth and love you dance until dawn.

Teleporting back to your home you feel refreshed. Sleep can wait; you are vibrant and ready to attack the new day. 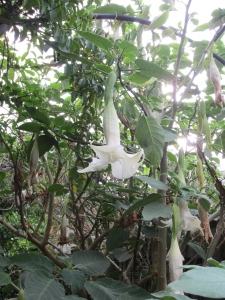