Oral history is not always reliable. I had thought I’d write a quick post regarding my father in law, Eric Harold Pyett, who wrote yesterday’s short story, ‘Jenny and the Bag of Bones’. After a couple of checks on some of the details, facts have been distorted. So here is a little of what I’ve been able to decipher:

In 1930, Eric Pyett went to sea at the age of 16. His father who had been a builder and shipwright in Liverpool, England, due to the depression, also left home and found work at sea. Eric was the eldest son, though had an older sister, Kathleen, and two younger brothers, Alan and Brian. 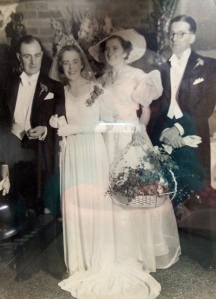 the war. We do know that he met Margarett, his wife to be, at a dance at Beauty Point, Tasmania, before the war. He was at this time working for the British Blue Funnel Line, shipping cargo, including apples from Tasmania to England. Eric and Margarett married on 28th February 1940.

After their marriage, Eric transferred to the ship, ‘Manunda’, Adelaide Steamship Company. This ship was converted to a hospital ship. The fall of Singapore happened on 15 February 1942. There was a build up of activities around the Northern coast of Australia.

On Thursday 19th February 1942, there were 55 ships in Darwin Harbour at the time of the attack. Six large ships and two smaller ones were sunk. There were about 176 people killed and about 200 seriously injured on ships in and around Darwin Harbour. Eric was 4th officer, and ashore, when the ‘Manunda’ with its red cross on a white background was sprayed with shrapnel, killing four people. 76 holes were peppered into her plates and a bomb exploded on B and C decks, missing the bridge, but starting many fires.

There were many staff injured and the navigational instruments were damaged. Hospital crew who, rescued seriously injured people from the water, manned the life- boats. There are differing accounts of how many people were killed and injured. In one account there were 13 members of the ships’ crew and hospital staff killed, 19 others seriously wounded and another 40 or so received minor wounds. Thanks to the Internet for this information. Such times must have made life seem very precious.

The ‘Manunda’ was able to leave Darwin the next day taking casualties from other ships to Fremantle. As Captain of the ‘Manunda’, Captain Gardener, was later awarded the OBE, in 1945 for his bravery. He navigated by the stars to Fremantle in their battered ship.

Eric later became Captain of the ‘Manunda’, after completing his Masters Ticket in Sydney, becoming the youngest Captain, at that time in Australia.

After the war, Eric and Margarett and Christopher moved from Malvern, Victoria to Devonport, Tasmania, where they settled and Eric built their beautiful home in North Street, completing it with his own myrtle furniture. Their acre garden was also a work of art.

Eric left the sea to work as a stevedore, organizing shipments leaving Devonport for far away places. Eric shared his love of classical music with his son Christopher who was born in 1943. Eric and Christopher inherited a great love and understanding of classical music from Eric’s Maternal Great Grandfather, composer, Sir Henry Bishop (1786-1855, the first knighthood to be bestowed on a musician).

Eric and Margarett had the happiest marriage of any couple I knew, as a child, and an adult. Margarett had an artistic streak and their home was once featured in Home Beautiful, in the 1950s. It was before its time being sun drenched, with large glass doors and windows to bring the garden inside. The eaves were at the right angle to capture the sun in winter and deflect it in summer. Eric had large round windows upstairs facing the street, and when we saw the round window on our house, we knew it to be the right one.

Ship’s bell that Eric had on their two houses, that he kept polished. We have moved it to our home in Victoria.

So all things considered, I believe that yesterday’s short story, ‘Jenny and the Bag of Bones,’ to be fiction. Christopher and I pondered this for some time, as it sounded so real, but looking at dates, it couldn’t have been true.