I feel uncomfortable about how these snippets of ‘Enduring Threads’ will be perceived. My aim has been to depict the carefree childhood of the 1940s and 1950s. The uncomplicated life of children who were privileged to have a mother at home; the freedom of play without the imposition of parental supervision, and an extensive wider family who enriched our lives.

Awareness of the present generation, our grandchildren, who are growing up with very different perceptions has inspired my recollections. They have the stress of both parents working and the development of technical devices that negate their close affinity with nature. Being driven to school, free play limited and computerisation changing the simple task of, for instance, writing a letter. My sharing of my own experiences through life will, in time, seem the antithesis of their own childhood. So, I continue to write:

Exciting holidays with the Roberts-Thomson family were spent in Launceston, at Great Lake, and later in Adelaide. Our cousins came to stay with us in Devonport too. One early incident: I tried to step on a floating object in their fishpond thinking that it would support my weight. Of course it sank and so did I. An early physics lesson. 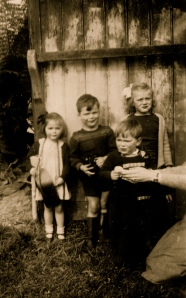 Uncle John was a keen trout fisherman. When we were out fishing on Great Lake, he’d say, ‘Can you spot a bunyip?’

Uncle John’s hobbies were: making flies, photography, woodcarving, playing the violin and astronomy. He built his own telescope and taught himself to play the violin. He was accepted into the Adelaide Symphony Orchestra before his arthritis became problematic. My father joked, (because John was a minister),

‘He can do all that because he only has to work one day a week!’

Auntie Lillian played the piano. Girls were not encouraged to succeed professionally outside the home but she had worked for the family firm before her marriage.

Lillian must have been very frustrated as a housewife and a minister’s wife. She resorted to 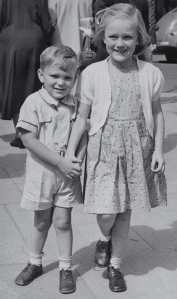 disciplining the boys with the wooden spoon, and on one occasion it broke when she spanked Clive. All her life she wrote letters weekly to her siblings. After my mother’s death we exchanged letters, keeping up to date with the news of the wider family, until her death at the age of 98.

Cousin Peter ‘s enthusiasm for his environment made him an interesting guide when I visited them as a teenager. We’d cycle to visit the Adelaide Art Gallery, the astronomy observatory, plus sights up in the hills beyond Adelaide. Mary Elizabeth and Peter topped Adelaide University in Medicine. Mary went on to become a paediatrician and married Adel, an Egyptian, against her father’s wishes. Adel later became a professor of nuclear medicine in Canada. He found Australians racist, so they left for America straight after their wedding, later to live in Canada.

Peter R-T went to Oxford after completing his medical degree. He later became a professor at Adelaide University specialising in rheumatology.

Mark R-T always wanted to be a pilot. His parents insisted, ‘ You must do a science degree first, something to fall back on.’ He did this and then became a pilot.

Auntie Mary, Mum’s younger sister, married in her thirties. She travelled overseas on her own prior to her engagement. My parents went to Sydney to welcome her home and the Pyetts moved in to look after us. Clive and Christopher were away at Scotch and Grammar Schools in Launceston. The sweet corn was ripe. My parents sent me a cooking set from Sydney for my birthday. It had miniature cake tins and a small frying pan that I could cook with. Grandma gave me a crystal set (radio) with headphones. This meant I could now listen to 7AD, the local commercial station, and become familiar with top of the pops music. Eric Pyett helped set it up for me in his kind and practical way.

Auntie Mary’s welcome home afternoon tea was organised for her friends to hear about her travels. I had been asked to put out the sugar, which she’d brought back from all of the countries she had visited. I started tearing the packets emptying the sugar, quickly to be told they were to remain in their packaging. How foolish I felt. Auntie Mary married Bob Gott on 2nd November 1957. Mary had previously refused to marry Bob and live with his mother, as she and the mother didn’t get on. Fortunately Mrs. Gott died. Cousin Jane was their bridesmaid and Mary Elizabeth and I were the flower girls. My tooth was capped, so that I no longer had a toothless smile; the previous cap I’d swallowed. This wedding ceremony was the first to take place in the newly built St. Columba’s Presbyterian Church in Devonport, followed by a reception at 6 Ronald Street. 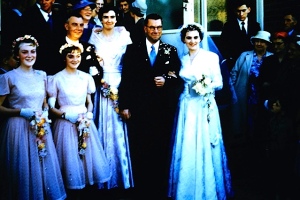 Auntie Mary took down the flying ducks on the walls and made 124 her own. Timothy, Robert and Susan were born in quick succession. 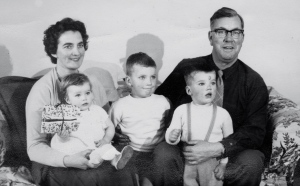 Cooking was something that Mary learnt, but it didn’t come with the innate ease that my mother seemed to have. Mary and Brenda mixed in different circles, though that could have been due to their age difference. Both appeared very confident people and attracted many people into their orbits.

Uncle Bob bought the newsagency in Rooke Street, and I was able to work there in the school holidays. His eccentric habit of wearing his Scottish tam-o’-shanter brings a smile to those who remember him.