My great maternal grandparents, Nanna and Papa McFie lived on top of the world, opposite the boundary to the primary school below, and the Catholic school above, in Stewart Street. Papa had been a tailor before becoming a state politician, which he remained for seventeen years, and a coroner for fifty years. In retirement, before his stroke, he could be seen marching down into town, tipping his bowler to one and all. His distinguishing features being his waxed and twirled moustache, a stiff high white collar and a striped carnation in his buttonhole. Nana, softer, would sit in her sunroom on a cane chair that pulled out so that her legs were raised, knitting, sewing or doing embroidery. Her contented round face would light up with pleasure as we approached, her halo of sparse white hair giving her an angelic look. Their garden rambled unattended with a huge pine tree up the back.

Their little electric fire, imitated a coal fire, glowing red attempting to warm the sitting room. Their frugal existence was suspended on The Red Letter Day when they received a letter from the Queen for their sixtieth wedding anniversary. Celebrations for both the royal missive and their special wedding anniversary broke the feeling of austerity in their home. 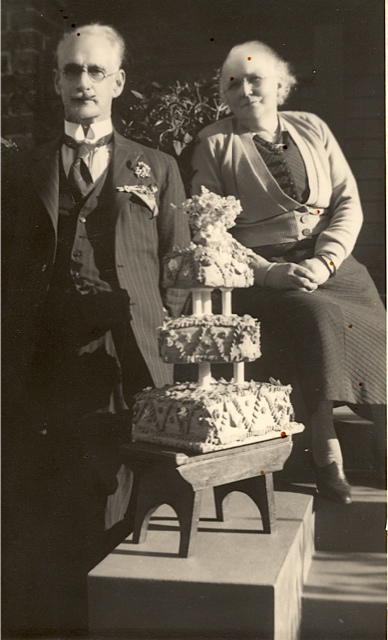 Bringing up their own children: Chloris, Hector, Mynie, Malcolm and Don; was succeeded by taking in and caring for Janet, Chloris and Brian, children of their son Don and his ex-wife Dawn; as well as Jock, son of Malcolm. Great Uncle Hector made good, following in his father’s footsteps, becoming a Liberal politician.

I didn’t question my mother when she said,‘The McFie men are no good!’ It wasn’t until my cousin Peter did some family-tree research that my understanding broadened. Hector McFie, our antecedent, came out to Tasmania in 1830 as a convict, aged 25. He was a tailor and subsequently married three times. His death was from ‘Fatal Effects Of Intemperance’ as disclosed in the Hobart Town Daily Mercury, Wednesday morning 9 June 1858. This side of our family history was never discussed, as my mother said,

‘I have no interest in the past.’

Considering ancient Hector’s minor misdemeanors, and being forced to leave his home in Rothsay on the Isle of Bute, Scotland, brought about a whole new dynasty on the other side of the world.

Not only was there a repetition of names in these genealogical records, a plethora of Hectors, but also a repetition of career choices: tailoring, seafaring and building, the latter two continuing today.

Taken at Queenstown on the Federal election campaign. Snow fell all the time 2 days, 5 ft in some places. Dame Enid Lyons was the first woman to be elected to the Federal Parliament at Canberra Sept 1943, with H. H. McFie

Hungry children from the state school were fed at Nana’s home during the depression. Vegetable soup was cooked in the copper. My mother would put her hand up to be fed too, but only on the odd occasion would she be allowed to go over the road to her grandmother’s with the others.

‘Look after this and cherish it’, Nanna spoke in her Scots burr as she gave me a little brass dog.  I still have it. ‘It is important to dry between your toes’, was another important message that I continue to pass on.  Visual memories of buckets in the bathroom to collect the rain- water from the leaky roof remain with me as Nanna shrugged her shoulders.  Papa always had sweets for us, often liquorice alsorts. I only liked the liquorice part, stuffing the gooey pastel stuff in hidden places. The twisted clear yellow ambrosial barley sugar was my favourite.

After Nanna died, Papa had a stroke that left him with no speech.

When he recuperated and was on his feet again, we children would torment him, knowing he couldn’t tell our grandmother what we were doing. He’d chase us around waving his walking stick at us, totally frustrated that he couldn’t catch us or speak. Grandma would come out and say,

‘Don’t wave your stick at the children!’

That made us feel guilty and we’d stop our bullying tactics.

Nanna died just before the Queen’s visit in 1954. She’d been so looking forward to the visit, which was celebrated very enthusiastically in Devonport with streamers decorating the way. Even my father was swept up by the hysteria and constructed a stand for friends to gather on to wave their flags. They were sorely disappointed, as the car didn’t slow down sufficiently for them to get a proper look.

Aged eight, dressed as a Brownie, I walked with the whole school to the oval. My classmate Lynette Holman presented the Queen with a bouquet, as Lynette’s father was the Council Clerk. The cortege went up to Bell’s Parade, Latrobe, where they had a toilet especially constructed for Her Royal Highness, in which she was sick. Afterwards the toilet was auctioned.

My maternal great-grandmother, Nanna, was Hannah Elizabeth Chapman before she married Henry Hector McFie in 1892. When I returned to Devonport with my two daughters in 1975 I moved into the Chapman home at 50 Wenvoe Street. The two last Chapman maiden ladies had died; they were cousins of my grandmother. They loved the view of the river and ocean in the distance. Ivy had been a pharmacist at the local chemist shop, and Chappie, as we called her, was a seamstress.

Mynie and Chloris
with their mother Hannah, (Nana)

(Great) Auntie Mynie, my grandmother’s sister, lived up in Hiller Street. She married John Donohue who was the editor of the local newspaper, The Advocate. He had six children when she married him, and they went on to have two more. Jane was nine years older than me, and Hector seven. The other children were grown and gone, though they continued to visit.

Auntie Mynie’s pastries were renown afar for their lightness. When Uncle John died she made ends meet by growing flowers and making and selling wreaths from home.  She also helped with the Scouts’ catering business. It was amazing what Auntie Mynie could produce out of her very old Moffat oven. Sometimes there would be six pavlovas sitting there, waiting to be delivered.

Even though Mynie was fourth generation Tasmanian, her Scottishness was unwavering. She had Scottie dogs on cushion covers, Scottish ornaments, a silver thistle cruet set and Scotch thistles on her dinner set and teacups. She introduced us to peppermint liqueur in lemonade, the fresh bubbling smell of peppermint tickling our noses. Unlike her teatotal sister, my grandmother, she also liked a drop of Scotch whisky.

When I was very young, a quondam story is retold; I broke a bottle of perfume in their bathroom. Auntie Mynie could never wear that scent again, as the smell in the bathroom was overpowering. She loved giving me cheap perfume for birthdays; I’m sure it was payback time for my mother, but I loved it.

Taking our first trip across the Mersey, Auntie Mynie took Clive and me with her own children and Miss Marshall for a picnic to East Devonport beach. We had their liver and white spaniel Nip with us, who was later killed by snakebite.

The house in Hiller Street expanded like a piano accordion, accommodating many and squeezing out contented visitors who exuded Mynie’s warmth, with confirmation of their right place in the world. Playing Solo was a regular activity; she even played with the dreaded dragoness, Engel Holyman, who most people were scared of. Though I didn’t know Engel well, her reputation went before her and I was surprised later to find out that we were distantly related. (Nanna McFie’s mother’s sister married a Holyman.) When Engel ordered wood, Jane related to me later, they told the deliveryman,’Tell them to pay before you drop!’

The Holyman family was known in the aviation industry; they were all keen fliers. When Engel died she wanted her ashes taken up in a plane and scattered. The family dutifully did as requested only to return with the ashes stuck to the wet plane.